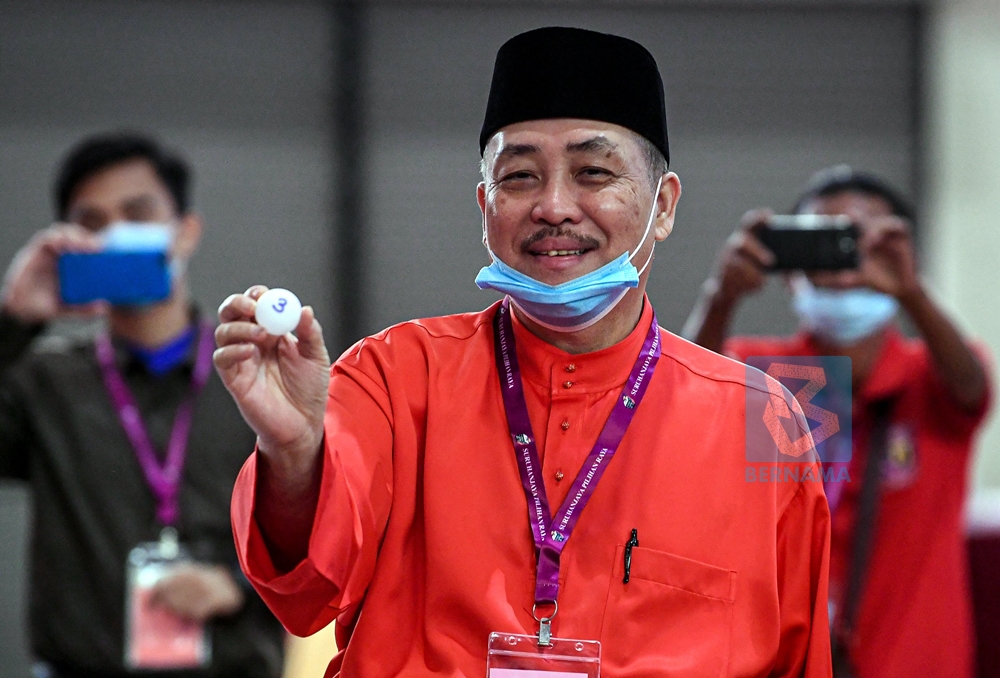 Hajiji shows the number he had picked in the order of candidates in the ballot papers after submitting his nomination papers at Dewan Seri Sulaman Tuaran this morning. – Picture by Bernama.

SULAMAN (sept 12): Parti Pribumi Bersatu Malaysia Sabah chief Datuk Seri Hajiji Noor said he has not been officially informed that he is being proposed as the next chief minister if the newly formed Gabungan Rakyat Sabah coalition wins in the state election.

The Sulaman candidate said he was humbled that Prime Minister Tan Sri Muhyiddin Yassin had named him as a possible chief minister but he pointed out that the focus now for his party and its allies should be on winning the polls on Sept 26.

He also said the focus now for his party and its allies should be on winning the polls on Sept 26.

I have not been informed officially but we and our partners (in Gabungan Rakyat Sabah) will settle this matter when the time comes.

Of course I will accept the nomination, but that endorsement (matter) comes later, it does not matter now. We want to win the state election first, he told the press when met during the nomination for the N.12 Sulaman seat here at Dewan Seri Sulaman today.

He explained that he would leave the matter to the components in Gabungan Rakyat Sabah, namely PN, Barisan Nasional (BN), and Parti Bersatu Sabah.

At an event in Tuaran earlier today, Muhyiddin had mooted Hajiji as the next chief minister, adding that this would be decided by the members of the coalition.

“Who knows, if our partners in Perikatan, Barisan and others agree, the best we can offer as candidate to lead Sabah is none other than Hajiji,” the Bersatu president reportedly said.

He successfully defended the Sulaman seat in the general election in 2018 after he had garnered 12,966 with a majority of 7,774.