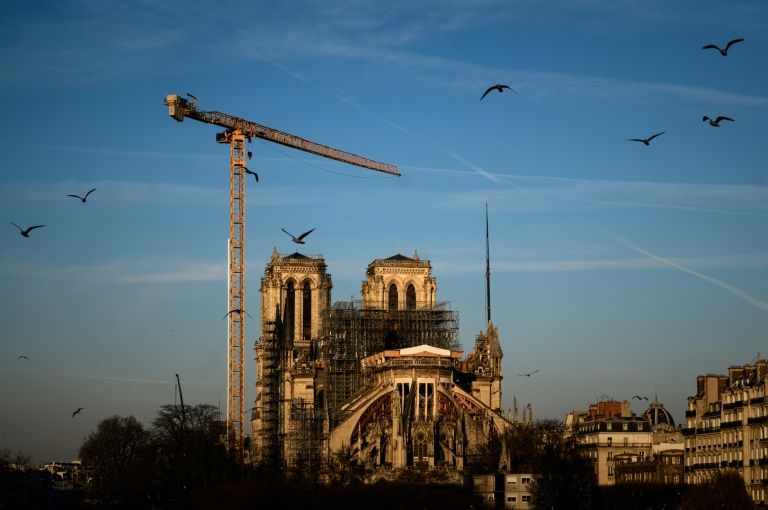 The head of the Guild of French Architects has warned against “seemingly brilliant solutions” which involve metal or concrete rafters as he urged the use of wood for reconstruction of Notre-Dame’s fire-ravaged roof. AFP Photo

PARIS: French architects want the roof of the fire-ravaged Notre-Dame cathedral to be rebuilt in wood and not in metal or concrete.

One of the heads of the country’s biggest architects’ body said reconstructing the roof in anything other than the original wood would be a mistake.

The intervention by Eric Wirth of the Guild of French Architects comes amid controversy over French President Emmanuel Macron’s wish for the spire of the 13th-century monument to be given a “contemporary” touch.

“The most modern and ecological material today is wood,” Wirth said Wednesday, which, as well as being more fire-resistant than the alternatives, also traps carbon, he insisted.

His come after the army general put in charge of the restoration, Jean-Louis Georgelin, dismissed reports that the massive roof would be redone in oak as nothing more than “lobbying” by the wood industry.

“There will be a study, and all possible options will be examined,” he said.

But Wirth took him to task, telling French MPs at a parliamentary hearing that “talking about lobbying on a subject like this does not honour the edifice.”

Price was not an issue, he argued, “the money is there”.

So far pledges totalling 922 million euros (over $1 billion) have been received, ranging from a single euro offered by an American child to 200 million euros by French luxury goods billionaire Bernard Arnault.

Wirth said a wooden roof like the original would also guarantee the structural integrity of the cathedral, which is still threatened by the risk of collapse nine months after the devastating fire last April.

“The cathedral has been there for 800 years. Had it been built in concrete or steel it would not still be there,” he added.

“Even with all the (chemical) protection treatments, given the intensity of the blaze… the steel would have held for half an hour and then it would have twisted, pulling on the walls and everything would have collapsed.

“We have to be sceptical of seemingly brilliant solutions” which involve metal or concrete rafters, Wirth warned, which vaunt their lightness.

Gothic cathedrals like Notre-Dame “stand up structurally because there is a large mass on the vaulted ceiling… they only work because the roof is heavy.”

What is more, “we are lucky to have all the information we need to rebuild an identical roof already there digitally,” Wirth said.

However, Wirth warned that rebuilding the roof may take longer than the five-year target set by Macron.

He said it was useful as an “objective but not an imperative”. – AFP