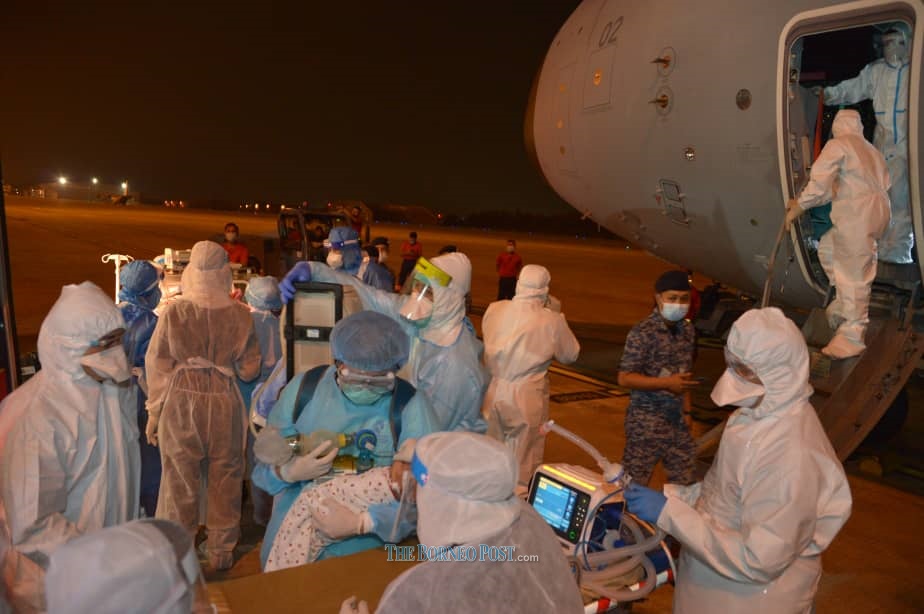 The babies being checked at the Subang air force base tarmac before being sent to their respective hospitals via ambulance.

KUCHING (Nov 21): Three babies who required immediate medical attention due to their heart condition were specially flown in to the Subang air force base by the Royal Malaysian Air Force (RMAF) last night.

All three babies, who were accompanied by their mothers, departed Kuching onboard the RMAF’s A400M Atlas at 7pm and arrived safely in Subang at 8.40pm.

The air force in a statement said the babies comprised of a 20-day-old girl Eliora Mia Nawan who suffers from ‘transposition of great arteries’ will be treated at the Gleneagles Hospital in Ampang.

All three babies were referred to their respective hospitals by the Sarawak General Hospital.

The statement also said the goodwill flight is a reflection of RMAF’s commitment to carry out their social responsibilities by deploying their assets during a time of need.

The air force via the A400M Atlas aircraft has also provided logistics solution to the Ministry of Health, Academy Medicine of Malaysia and Yayasan Amal Malaysia by sending in medical supplies to Kota Kinabalu and Tawau in Sabah to combat the Covid-19 epidemic.