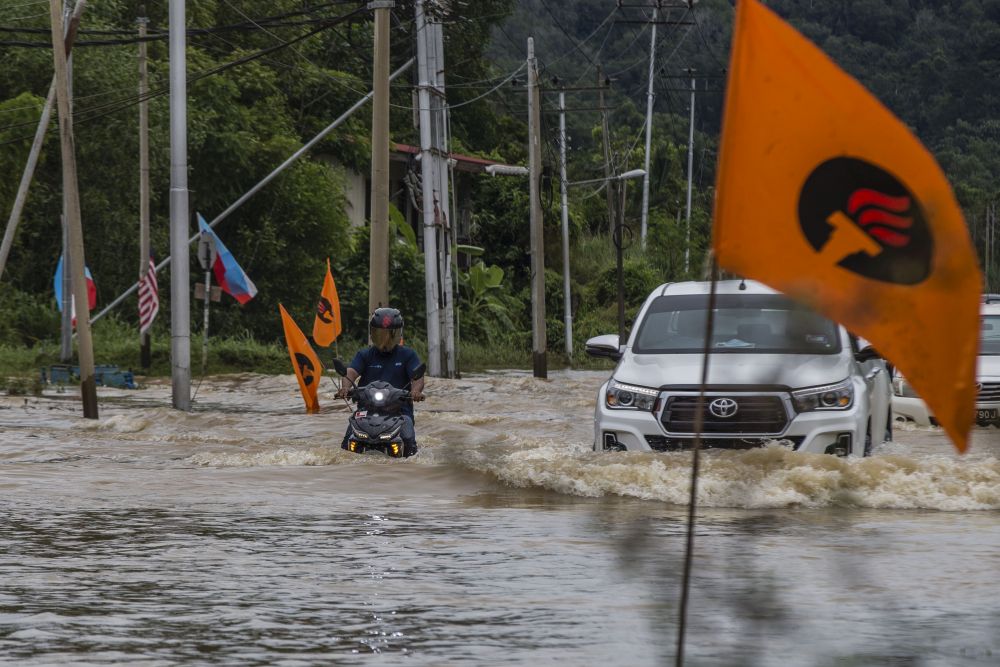 KOTA KINABALU (Sept 15) A torrential downpour lasting hours and causing flash floods across the north Borneo state of Sabah, paired with wind speeds at over 50km/h have forced many election candidates to cancel their events since last night.

The rain on their election parade began yesterday evening and eased up a little after midnight, only to return with dramatic thunder and lightning earlier this morning, consistent with the warnings of the Malaysian Meteorological Department (MetMalaysia) that were issued last Sunday.

Political rallies scheduled for Monday evening by parties such as DAP and Upko were dropped as water levels rose.

The morning programmes, including nearly all the walkabouts and meet-and-greet events this morning by the DAP, Parti Bersatu Sabah (PBS), and PKR were similarly cancelled when the rain persisted into the afternoon.

MetMalaysia predicts the stormy weather to continue until the day after Malaysia Day tomorrow.

Just several kilometres away from the state capital in the constituency of Moyog, Jalan Datuk Panglima Banting, one of the main veins connecting the urban and semi urban areas had become inaccessible for most vehicles after water levels rose more than a metre deep.

Stagnant waters obstructed vehicles from heading northbound, as only pickup trucks and lorries were seen braving through the waters. Not all were successful.

An unfortunate SUV that attempted to drive through the flood stalled in the middle of the road.

Seeing that, a Sabah Health Department van that came after turned around to avoid sharing the same fate.

Police and tow trucks were later seen on scene to assist the stalled car, but the flooded street had by then caused traffic backlogs on both sides as smaller vehicles made three-point turns to avoid the flash flood. – Malay Mail