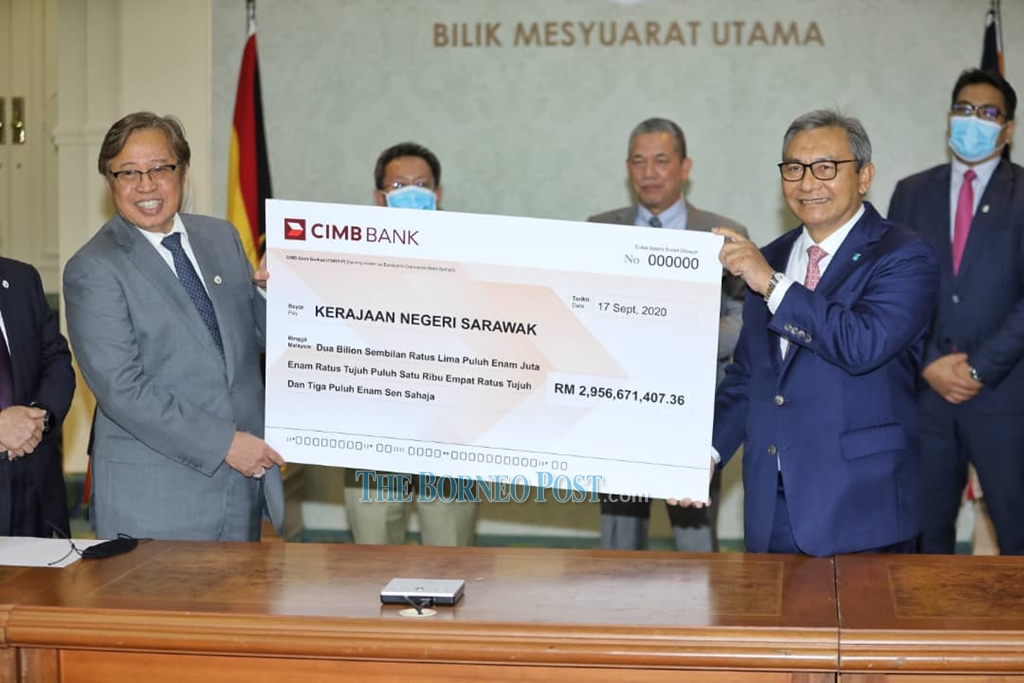 KUCHING (Sept 17): Petroliam Nasional Berhad (Petronas) and its subsidiaries today handed over a cheque for RM2,956,671,407.36 to the Sarawak government as payment for the state sales tax (SST) on petroleum products.

Chief Minister Datuk Patinggi Abang Johari Tun Openg, who received the cheque during a ceremony at Wisma Bapa Malaysia here, said the amount was for SST owed from 2019.

Abang Johari said the SST for this year would be paid when assessment had been made based on the volume of the petroleum products, namely, crude oil, condensates, urea and liquefied petroleum gas actually sold and the sale value of these products.

He said the payment of the SST by Petronas and its subsidiaries was the result of a settlement reached between Petronas, the federal government and the state government.

Abang Johari pointed out that Petronas and Sarawak had reached an agreement whereby Petronas withdrew its judicial review application and recognised the state’s constitutional power to impose the tax and the state government also discontinued its legal suit against the oil corporation.

Following this settlement of the legal proceedings, he said Petronas and its subsidiaries had registered as taxable persons and submitted their returns to the Comptroller of SST.

Abang Johari also thanked Shell, Murphy Oil, Pertamina and Sapura OMV who have earlier complied and settled the SST due to the state totalling RM1.38 billion.

He said the state government would now focus on discussions with the federal government to reach a commercial settlement on other matters relating to oil and gas found and produced in Sarawak.

To a question from the press, Abang Johari said he believes that all Sarawakians were happy with the settlement with Petronas.

He also said that the fund would be utilised for various development projects in the state.

In January last year, the Sarawak government imposed the five per cent SST on petroleum products under the states Sales Tax Ordinance 1998, which Petronas refused to pay, citing it as unconstitutional.

The state government then took legal action against the national oil and gas corporation.

The Kuching High Court then ruled on March 13 that Sabah and Sarawak had the right under the Federal Constitution to impose SST on petroleum products.

Petronas had initially filed an appeal in court but the state and the oil corporation reached an agreement in May this year and both sides dropped their legal suits against each other.