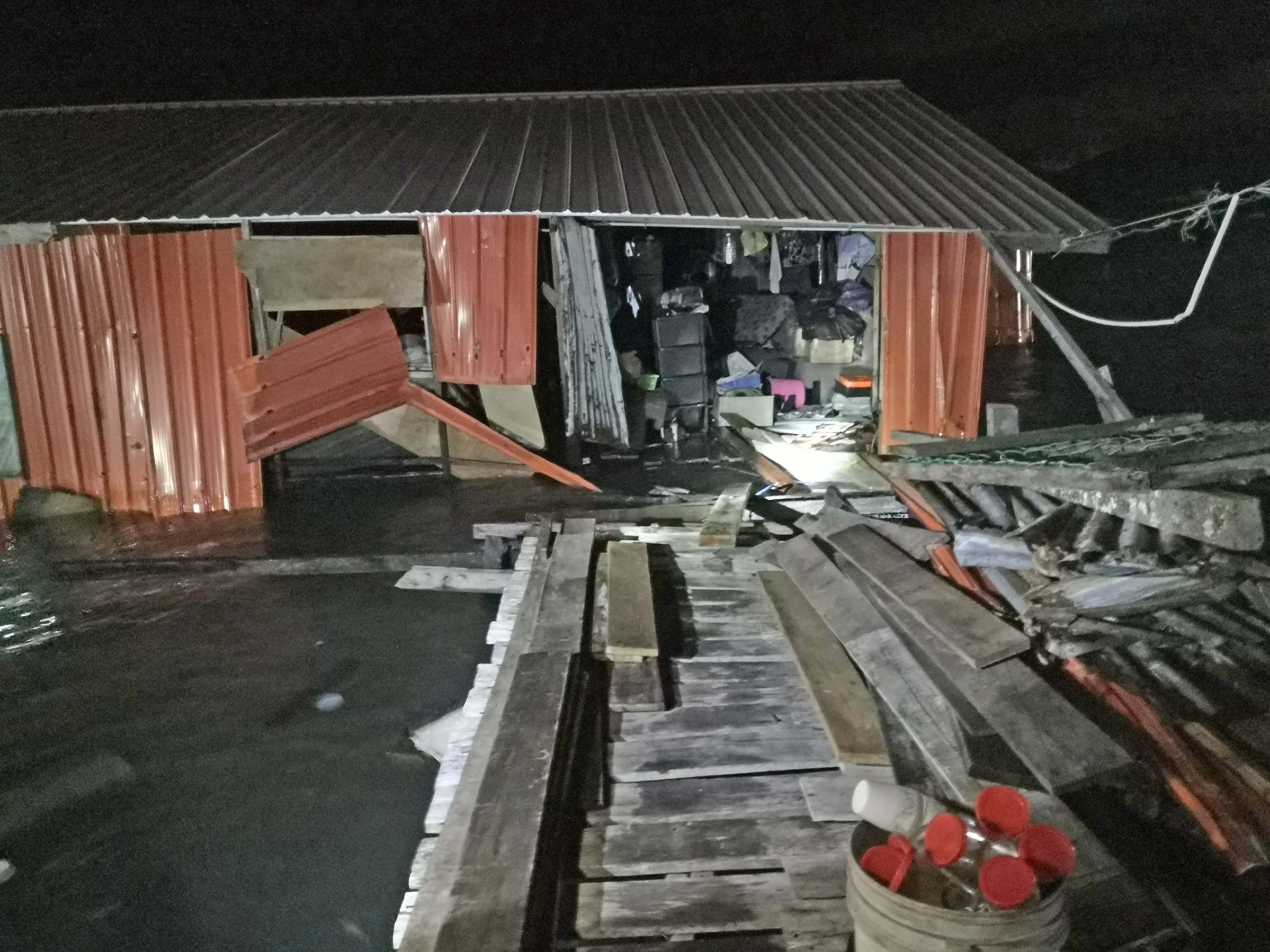 One of the two water village houses in Tanjung Aru Baru that was badly damaged by the high tide on Wednesday.

The rare phenomenon, which started around 8 pm on Jan 13, has also caused about 99 people from 17 families to leave their homes as strong waves and rising water continue to threaten their homes.

Most of the families are currently taking shelter at the Tanjung Aru community hall, surau or with relatives.

One of the victims, Nabsah Darudin, 59, whose house was badly affected by the tidal wave said she only managed to grab important documents as she fears her wooden house will be swept away by the water anytime.

I was still at work when I got a call from one of my children saying that the water had entered our home.

I immediately rushed home and saw my house was about to be swept away by the water.

All I could do is just grab all the important documents and run out from our home, she said when met on Wednesday.

According to Nabsah, water started to enter the kitchen on Tuesday and got worse by Wednesday.

By the time I reached home, the water had almost submerged my house. The wave has also destroyed the wall while most of our belongings have been swept away by the water, she added.

The rare phenomenon was believed to have started since last Saturday and worsened by Wednesday.

Most villages in Tanjung Aru Baru, whose houses are built on water, are staying up all night and monitoring the situation for their safety.

Another resident, Mohd Yusri Jamrin, 45, and his family were also forced to leave their home as water started entering the house.

For the my safety and that of my family, we decided to evacuate as water has entered the living room and bedroom.

We are now taking shelter at the community hall until the situation is back to normal, he said.
Bakar Adani, 71, another affected resident said, high tide is normal in Tanjung Aru but this was the worst to have occurred in decades.

The worst was during the Greg storm in 1996. While todays event was not that bad (as compared to 1996) but the high tide has destroyed several houses.

Most of us will be staying up all night to keep watch on the water level and situation, he said.

A spokesperson from the Malaysia Civil Defence Force (Sabah) said 99 people from 17 families have been placed at the Tanjung Aru community hall and a nearby surau while some are taking shelter with relatives.

Among those affected are 21 men, 16 women, 43 children and nine elderly people.

Only two water village houses were badly affected by the high tide while most victims were told to leave their home for their own safety, said the spokesperson, adding that teams have been placed on standby to monitor the situation in Tanjung Aru.