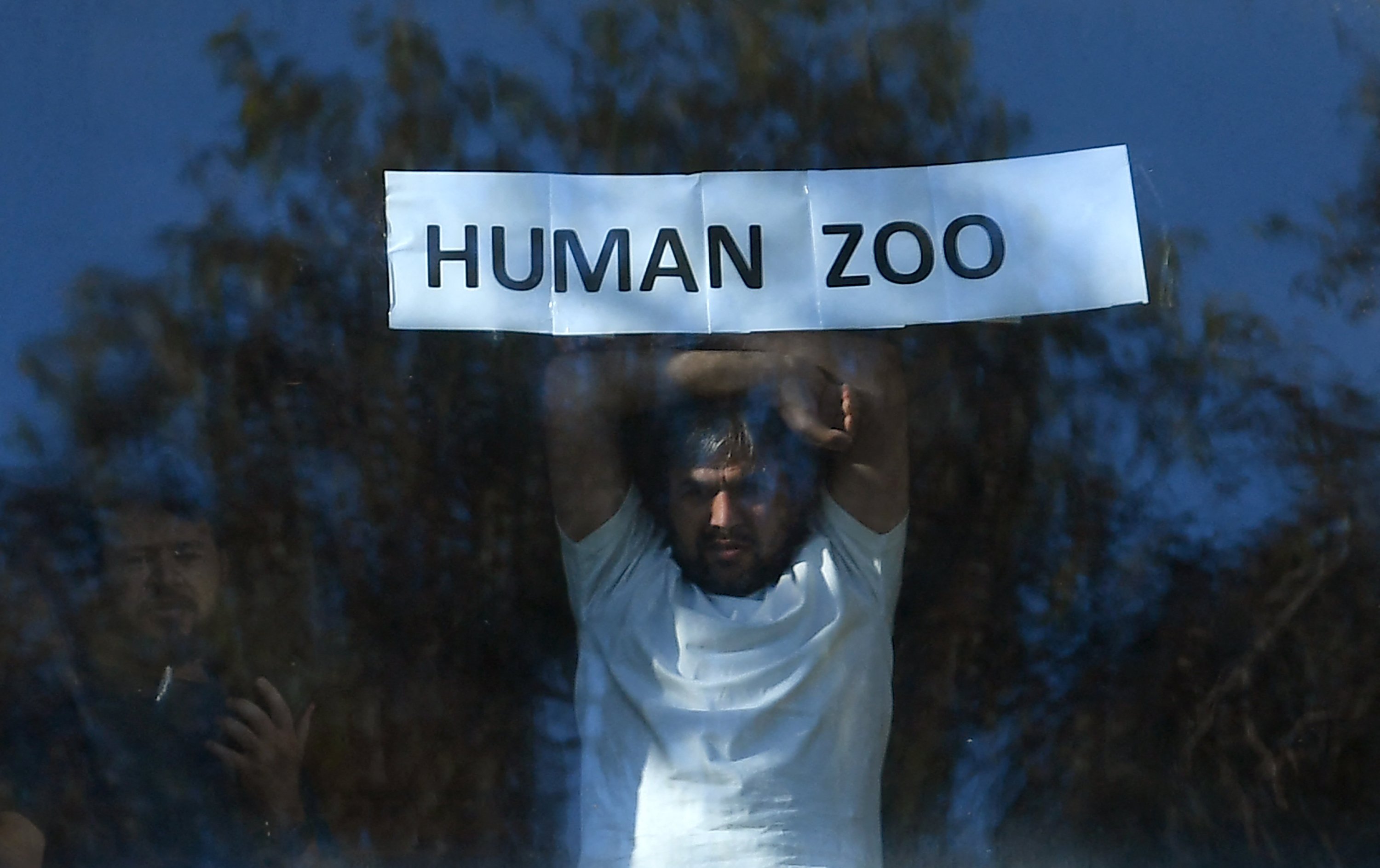 Detainees in a government detention centre where Djokovic was staying watch members of the local Serbian community rally in support of him in Melbourne on Jan 9, 2022. — AFP photo

MELBOURNE (Jan 12):It was the most unlikely Australian residence for the world’s number one tennis player, Novak Djokovic: a grim, five-storey former hotel with no check-out allowed.

For four nights, Melbourne’s infamous “alternative place of detention” for migrants became his abode: no tennis courts, no swimming pool and no leaving.

But the 34-year-old ace reportedly was not seen by his fellow residents: about 32 people held under Australia’s stringent immigration policy, some of them for years.

And a day after the Serbian superstar left the detention centre as celebrating fans sang and danced, his cancelled visa restored by a court, the media glare left with him.

On Tuesday morning, there were only two television reporters outside and no protesters.

A lonely cardboard sign read: “Free Novak and all the refugees”. Chalk scrawled on the front of the hotel said: “#gameover free the refugees”.

Days earlier, people had been scrawling graffiti on the walls, hanging pro-refugee banners from the building, singing and dancing.

Among the mix of demonstrators were at least 20 activists trying to highlight the situation of people caught up in Australia’s strict migration system.

On Djokovic’s first day in detention, activist Kim Matousek pointedly remarked on the interest being shown in the tennis ace’s brief stay.

“Well I find it kind of interesting that they’re protesting for Djokovic, he’s only been in detention for less than a day,” she said.

Above Matousek, men at the facility had put up signs at the windows reading: “Nine years too long” and “Aren’t we human beings like you?”

The food served inside is of poor quality, she said. “The coleslaw smells like alcohol because it’s rotten, they won’t eat it.”

The facility, formerly the Park Hotel, gained notoriety last December when a fire broke out in the building. One person was hospitalised for smoke inhalation. There were no fatalities.

A week later, asylum seekers posted images to social media of food they said they were served, which contained maggots and mouldy bread.

Deviani Segal, a 54-year-old piano teacher, was also demonstrating to remind people about those inside.

“I would rather the message bethat no one should be locked in this hellhole,” he said.

But for the refugees, he said, “it is not a game”.

“We fear that long after Djokovic is back on the lucrative global tennis circuit, those men will still be in detention - many of them in their ninth year of being held by the Australian government,” he said on the weekend.

“These men, like all those held onshore and offshore in detention, fled their homelands seeking safety.”

Detainee Mehdi Ali told AFP on Thursday that Djokovic is his favourite tennis player, and that he was saddened by the prospect of the star being held there.

“The media will talk about us more, the whole world probably, which is so sad, just because Djokovic would be here for a few days,” he said.

Under Australia’s hardline immigration policies, migrants attempting to reach the country by boat have for years been sent to detention centres on Papua New Guinea’s Manus Island and the tiny Pacific island nation of Nauru.

But it does not spell an end to Canberra’s approach to migrants who arrive by sea: Nauru has committed to carry on accepting Australia’s asylum seekers.

Not all refugees have the same fate, though.

Afghan refugees fleeing the Taliban have been granted asylum by the Australian government and are in temporary accommodation just down the road from the former Park Hotel.

The government had been “quite supportive” said Afghan evacuee Qamaria Sharani.

“We are quite happy with them,” she told AFP last week.

Sharani said she was worried about her extended family left behind, including parents and siblings.

“We have left everything behind. We have left our places, our home, our education. Everything there. So we are here for a better future. For my kids, especially.”

And she held out sympathy for those being held long term inside the former hotel.

“It’s a very hard time. They shouldn’t be up there so if it is possible, they must come out.” — AFP