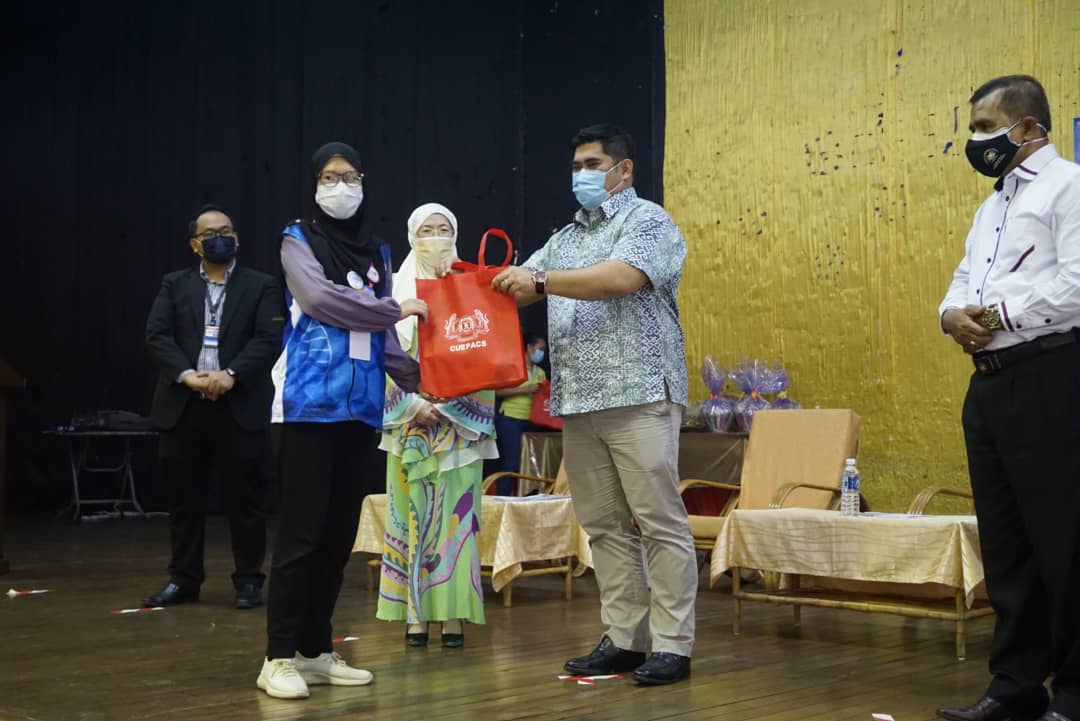 Shahelmey (second right) presenting a memento to one of the frontliners as Adnan looks on.

PENAMPANG(Oct 14): The relocation of Sabahans from one district to another is one of the factors why the vaccination rate in some parts of Sabah is still low.

We look at this issue from several aspects.

“One of the factors is that some of the individuals that are registered as constituents in that particular district may not be residing there anymore. Perhaps they have taken their vaccine shots elsewhere, he said.

For instance, Tongod is located in a very remote area. Some of the youths in that district may have moved elsewhere to work.

Perhaps, some of them have moved to Kota Kinabalu, Sandakan, or even the Peninsula.

“So, they might have taken their vaccine shots elsewhere, added Shahelmey.

He spoke to reporters when met during the presentation of certificates of appreciation, courtesy of Congress of Unions for Employees in Public and Civil Service (Cuepacs), to the frontliners here in the vaccination centre (PPV) at the KDCA compound.

Shahelmey disclosed that the relevant authorities have also approached the oil palm estates in Sandakan, Kinabatangan, and Tawau, to identify the workers who are still unvaccinated.

He further revealed that the State Health Department has intensified its vaccination process by conducting more thorough outreach programmes.

He said that the department is now going from house to house to vaccinate those who are still unvaccinated.

It is understood that all the PPVs in Sabah would be closed on Friday and all the vaccines would be provided by the respective district health clinics.

However, according to Shahelmey, a total of 16 PPVs would still be operational. These PPVs would be managed by the Ministry of Health directly, and not under the Sabah Covid-19 Immunisation Task Force (CITF).

He said that Sabah currently has a sufficient supply of Pfizer shots; several reserve stocks of the Sinovac second shots and less than 60,000 doses of the CanSino shots, along with a small number of the AstraZenaca shots.

Shahelmey explained that Sabahans may now request specific vaccines. However, this would depend on the circumstances and it would be subject to the availability of stocks.

Also present during the ceremony was Cuepacs President Adnan Mat.