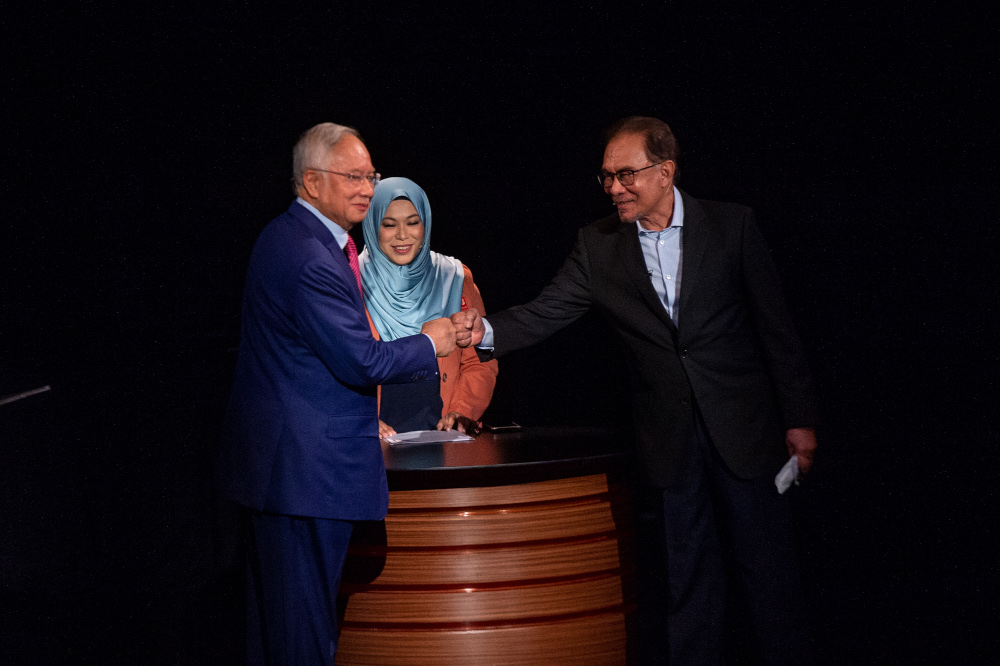 In a live debate with political rival Datuk Seri Anwar Ibrahim, Najib insisted that Sapuras failure would be harmful to Malaysias economy, and has already seen its market capitalisation fall from a height of over RM30 billion to around RM500 million now.

During the first section of the debate centred on the Sapura issue, Najib said Petronas could easily support Sapura via the takeover and sell it off later for a profit once it had been turned around.

Petronas takes over, Petronas guarantees that its RM7 billion contracts of Sapura can be delivered, can be settled well, and Petronas can guarantee a working capital that is sufficient for Sapura.

And when the company has recovered, its share (prices) have skyrocketed, Petronas can sell it to the market, he said.

Alternatively, Najib said the government could guarantee any loans that Sapura took with banks for its own turnaround, adding that the US rescue of firms such as AIG after the 2008 global financial crisis resulted in a profit of US$22 billion for the government.

Anwar disagreed with Najib, however, and maintained across all three parts on the Sapura section that no bailout or assistance should be extended until a forensic audit could be completed to determine the root cause of its financial troubles.

He also rejected Najibs claim that the Petronas takeover of Sapura would not include public funds.

Similarly, Petronas belongs to whom? It belongs to the government, belongs to the rakyat! Takeover? But I say, start with a forensic audit. Place the responsibility on who is involved. Dont just save it! he said.

Anwar also noted that many figures profited heavily from Sapura prior to its current troubles, noting that from group CEO Tan Sri Shahril Shamsuddin earned over RM1 billion during his time at the firm.

The federal Opposition leader said the government would go broke if it had to keep bailing out companies that are struggling financially.

Cash-strapped Sapura Energy posted a net loss to the tune of RM8.9 billion its highest ever for the financial year ended January 31, 2022 (FY22) from a net loss of RM160.87 million for the prior financial year, business paper The Edge reported.

After Sapuras latest losses were published, Najib urged the government to protect the company from bankruptcy. – Malay Mail