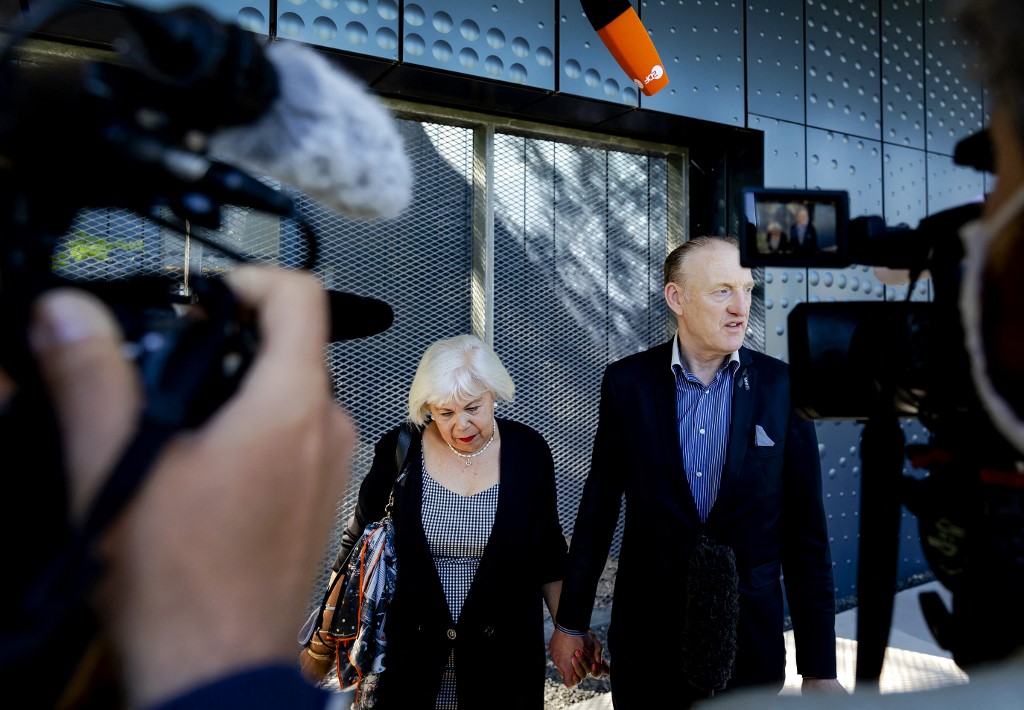 Relatives Evert van Zijtveld and his partner arrive on June 7, 2021 at the Judicial Complex Schiphol in Badhoevedorp, where judges will start hearing evidence against suspects in the 2014 downing of Malaysia Airlines flight MH17 over Ukraine, in which all 298 on board were killed. — AFP photo

BADHOEVEDORP, Netherlands (June 7): Dutch judges said today they wanted relatives of victims to finally have clarity about the downing of Malaysia Airlines flight MH17 over Ukraine as the trial of four suspects entered a key phase.

Some relatives were in court for the start of a week in which judges will at last examine evidence against the three Russians and one Ukrainian, who are on trial in absentia over the July 2014 disaster.

The trial formally began in March 2020 but has until now dealt with legal arguments, mainly about the admissibility of evidence in the crash in which all 298 passengers and crew on the Boeing 777 were killed.

Up until today no one has come forward and said they are even partially responsible for the crash of MH17, presiding judge Hendrik Steenhuis told the court.

Steenhuis said it was crucial for the evidence to be heard in open court despite the absence of Russian nationals Oleg Pulatov, Igor Girkin and Sergei Dubinsky, and Ukrainian citizen Leonid Kharchenko.

Only Pulatov has legal representation.

The hearing being public is important to society in general, and to the relatives particularly, that there will be clarity about the result of the investigation after years of investigation, the judge said.

Such a large case

Judges said the court will this week look at evidence about three key questions: whether the Boeing 777 was shot down by a Russian-made missile; the location the missile was fired from, and the role of the four suspects in the crash.

The idea that the plane had been downed by a BUK surface-to-air missile operated by pro-Russian separatists in eastern Ukraine was the main scenario, Steenhuis added, but they would also look at theories including that a plane had shot down MH17.

The court would be highlighting key parts of the evidence and not going over every part in court, he warned.

The file consists of 65,000 pages, and many hundreds of hours of video and audio recordings. Its such a large case its simply not possible to speak about every detail, the judge said.

The prosecution and defence will have the chance to raise issues during hearings lasting until July 9.

Relatives of the victims will be able to address the court in September.

The jet was travelling from Amsterdams Schiphol airport to Kuala Lumpur when it was shot down over part of eastern Ukraine controlled by pro-Russian rebels.

An international investigation concluded that a BUK missile that had originally come from the Russian armys 53rd Anti-Aircraft Missile Brigade based in the city of Kursk was responsible.

All four suspects are accused of being key figures among the separatist rebels battling Kiev.

Girkin, also known by his pseudonym Strelkov, is a former Russian spy and historical re-enactment fan who helped kickstart the war in Ukraine.

Dubinsky, who has also been tied to Russian intelligence, allegedly served as the separatists military intelligence chief while Pulatov was an ex-Russian special forces soldier and one of Dubinskys deputies.

Pulatov said in a video played to the court in November that he had seen no sign of any missile.

The trial is being held in the Netherlands, in a secure courtroom near Schiphol airport, because it was the point of departure for the doomed plane, and because 196 of the victims were Dutch.

The judges visited the reconstructed, shrapnel-pierced wreckage at a Dutch airbase for the first time in May in what they described as an emotionally loaded day. AFP