Coronavirus: Anyone in Sarawak who has been to Singapore told to undergo 14-day home quarantine 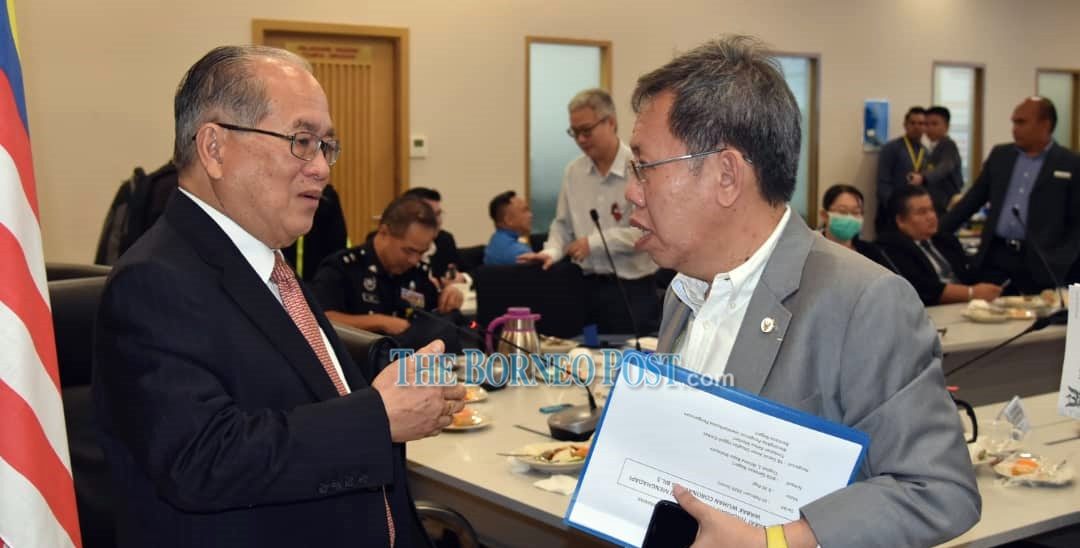 Uggah (left) and Dr Sim in a discussion after the meeting.

KUCHING: The State Disaster Management Committee (JPBN) has decided that anyone who has been to Singapore must undergo an immediate self-imposed 14 days home quarantine as a precaution against the spread of Novel coronavirus.

He said the decision was taken in view of the development in Singapore where the island republic Disease Outbreak Response System Condition (DORSCON) had issued an Orange warning level over the spread of the disease.

According to DORSCON, the level, its second highest, indicates the disease is “severe and spread easily from person to person but the disease has not spread widely in Singapore and is being contained.”

Uggah said the occurrence of the Wuhan virus clusters in Singapore which happened in a church, a medical product shop and a hotel after an international conference was held, was worrying Sarawak.

“They had not been to China but were affected in these places. Singapore as at yesterday has 43 confirmed cases,” he said in a press statement.

Uggah earlier chaired a meeting with the Health, Immigration, Tourism, Foreign Ministry, Police and other departments and agencies here to deliberate on the Novel coronavirus’ latest development.

Toward this end, Uggah said his committee would soon engage bodies representing the various churches, temples, mosques, the Unit For Other Religions, the taxi association, hoteliers association, long distance bus associations and others to rope in their co-operation in the fight against the deadly disease, particularly in preventing its spread.

“We are still free of the Novel coronavirus. I appeal to all to give us their unbridled support and co-operation.

“And on the part of the state Disaster Management Committee I would like to announce that we will meet every Monday morning from today to discuss the disease further development and to come up with the state strategic preparedness and action plans,” he said.

On the disease latest development in the state, he said from Jan 10 to yesterday, there had been 60 Patient Under Investigation (PUI) cases.

“We have 43 negative cases and 17 more are pending laboratory testings.

“Fifteen of these 43 cases involving Malaysian nationals are recorded at the Sarawak General Hospital, eight at Sibu Hospital, seven in Miri and four in Bintulu,” he said.

He said for those affecting Chinese nationals, four were recorded at the Sarawak General Hospital, two in Sibu and two in Bintulu.

He noted that the sole case involving a Thai national was recorded at Sarawak General Hospital.

As for the 17 pending cases, he said 11 involved Malaysians, five Chinese and one Thai.

Local Government and Housing Minister Datuk Sri Dr.Sim Khui Hian, who was also present at the meeting, urged all Sarawakians to work together in fighting the possible spread.

“So we all must abide by the guidelines and decisions made respectively by our Health Department and the State Disaster Management Committee.

“We must look after our personal health the best that we can and must always wash our hands after visiting public places,” he said.

Coronavirus: Anyone in Sarawak who has been to Singapore told to undergo 14-day home quarantine Borneo Post Online.