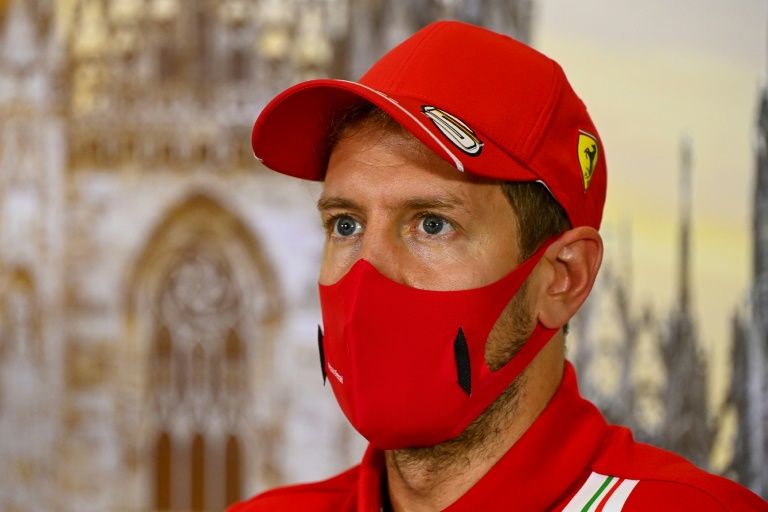 Sebastian Vettel is leaving Ferrari at the end of the season. AFP Photo

Former world champion Sebastian Vettel has signed for the renamed Aston Martin team for the 2021 season “and beyond”, the ambitious British Formula One outfit announced Thursday.

The 33-year-old German won four consecutive titles from 2010 to 2013 with Red Bull before joining Ferrari, but the Italian team has not renewed his contract.

Signing Vettel was “a clear signal” to the racing world, said Racing Point, which will take the Aston Martin name next year after Canadian billionaire owner Lawrence Stroll’s investment in the British brand.

Vettel will drive alongside Stroll’s son Lance and replace Mexican driver Sergio Perez who announced on Wednesday he will leave Racing Point at the end of the season.

“It’s a new adventure for me with a truly legendary car company. I have been impressed with the results the team has achieved this year and I believe the future looks even brighter,” said Vettel.

“The energy and commitment of Lawrence to the sport is inspiring and I believe we can build something very special together.”

He added: “I still have so much love for Formula 1 and my only motivation is to race at the front of the grid. To do so with Aston Martin will be a huge privilege.”

Vettel has spent six seasons with the Italian team without repeating his title-winning heroics at Red Bull.

This term has proved particularly difficult with Vettel sinking to 13th place in the championship ahead of Sunday’s Tuscan Grand Prix at Mugello in Italy as Ferrari have suffered a miserable season.

The last of Vettel’s 53 victories — the third most in F1 history — came at the 2019 Singapore Grand Prix. Only Michael Schumacher (91) and Lewis Hamilton (89) have won more races.

Vettel has also finished on the podium a further 67 times.

“Everybody at Silverstone is hugely excited by this news. Sebastian is a proven champion and brings a winning mentality that matches our own ambitions for the future as Aston Martin F1 Team,” said team principal Otmar Szafnauer.

“On a Saturday or Sunday afternoon, Sebastian is one of the best in the world, and I can’t think of a better driver to help take us into this new era. He will play a significant role in taking this team to the next level.”

Racing Point’s current season has been marred by controversy with accusations they had copied Mercedes’ brake ducts.

Vettel’s arrival means that the team will dispense with the popular Perez, a dependable and fast racer who played a prominent role in saving the former Force India team during a financial crisis two years ago before it was taken over by the consortium that renamed it Racing Point.

“It hurts a bit as I bet on the team during very rough times; we managed to overcome obstacles and I am very proud of saving jobs of several my teammates,” Perez said on Twitter.

Vettel was informed brusquely by Ferrari in May prior to the launch of the coronavirus-hit 2020 season that his contract was not being renewed.

His name was linked immediately with Racing Point ahead of most other teams, notably because they made a very strong start this year with the so-called “pink Mercedes” car, claimed to be essentially a copy of last year’s title-winning Mercedes.

Vettel helped rebuild Ferrari into title contenders in 2017 and 2018 but the team fell short both years, partly as a result of several driver errors.

He was then outshone by the highly-rated Charles Leclerc last season, finishing fifth overall and 173 points behind championship winner Hamilton.

Ferrari, set to celebrate their 1000th race at the Tuscan Grand Prix, are the sport’s most successful team but their 2020 slump hit a new low last weekend when they failed to qualify at least one car in the top 10 on home soil for the Italian Grand Prix for the first time since 1984. — AFP