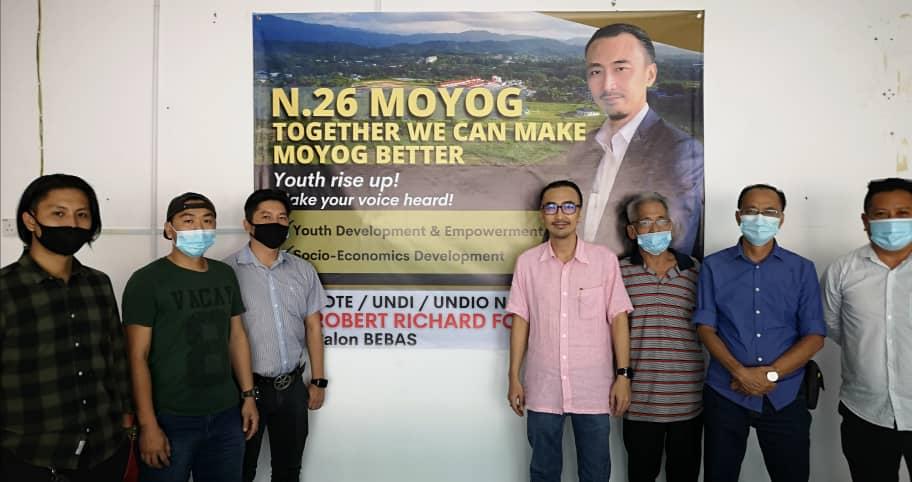 Foo (fourth from right) together with his team at his election operations room.

PENAMPANG: Unable to stand seeing youths continue to be neglected here, businessman Robert Richard Foo has decided to run as an independent candidate in Moyog.

He wanted to be given the chance to confront and address the various issues that have been plaguing youths in the district for so long.

The 43-year-old business degree holder said based on his observations, he believed so much more that can be done to empower youths in Moyog.

“Our youths are totally neglected. The past or incumbent assemblymen may argue about it and that they have carried out youth development programmes. However, all these are merely on the macro side and did not really achieve anything,” he said.

He admitted the daunting task ahead of him as he would be up against a heavyweight opponent with bigger resources in Moyog, but this in no way deter his motivation to help youths to tap their full potential.
“That is why my campaign manifesto focuses on just two initiatives namely youth development and empowerment and to create a better socio-economics development in Moyog, he said.

Foo said a comprehensive youth development programme was imperative since nearly 40 per cent of the 19,186 Moyog voters are youths and many were unemployed and still struggling to make ends meet.

If given the chance, Foo said he would mobilise his team to go to the nook and cranny of Moyog to find all these youths badly in need of assistance. He categorised the youths into three groupd namely school dropouts (form one to five), SPM leavers and graduates.

“We don’t know the exact figure yet but once we have identified them, we intend to set up a one-stop youth centre that will be able to provide whatever assistance to the target group, especially from the low-income families.

“Along with, to increase the educational resources and establishing various quality and better initiatives to add great value in educational and employment system in Moyog.

“We want to encourage the youths to have an entrepreneurial mindset and not to depend on 8 to 5 jobs only.

“Instead they should be thinking of how to be highly enterprising and competitive in order to improve their lives, he said, adding that this would then augur well with the socio-economics development.

“If nothing is done to ensure that our youths been given the opportunity to utilise and optimise their skills and talent, it is only natural that the economy will be hurt,” he said.

If given the chance by the Moyog voters, particularly the neglected youths and their concerned parents, Foo believed he could achieve the goal within five years.

On the stigma that independent candidates were merely fishing for cash as they hoped somebody will pay them to pull out from the election, Foo said, “it has never crossed my mind.”

“To me, there is only one thing in my mind. I really want to see our youths in Moyog excel,” he said.

Foo said people may call him the underdog and inexperience but he knows his election manifesto is realistic and not merely empty political promises.

On Sept 26, it will be a seven-cornered fight for Moyog with Foo being the sole independent candidate. He would be up against “heavyweights” Datuk Darell Leiking of Parti Warisan Sabah, John Masabal of PBS, Joe Suleiman representing PN, Datuk William Sampil (PCS), Vinson Loijon @ Patrick of Perpaduan and Marcel Annol of LDP.