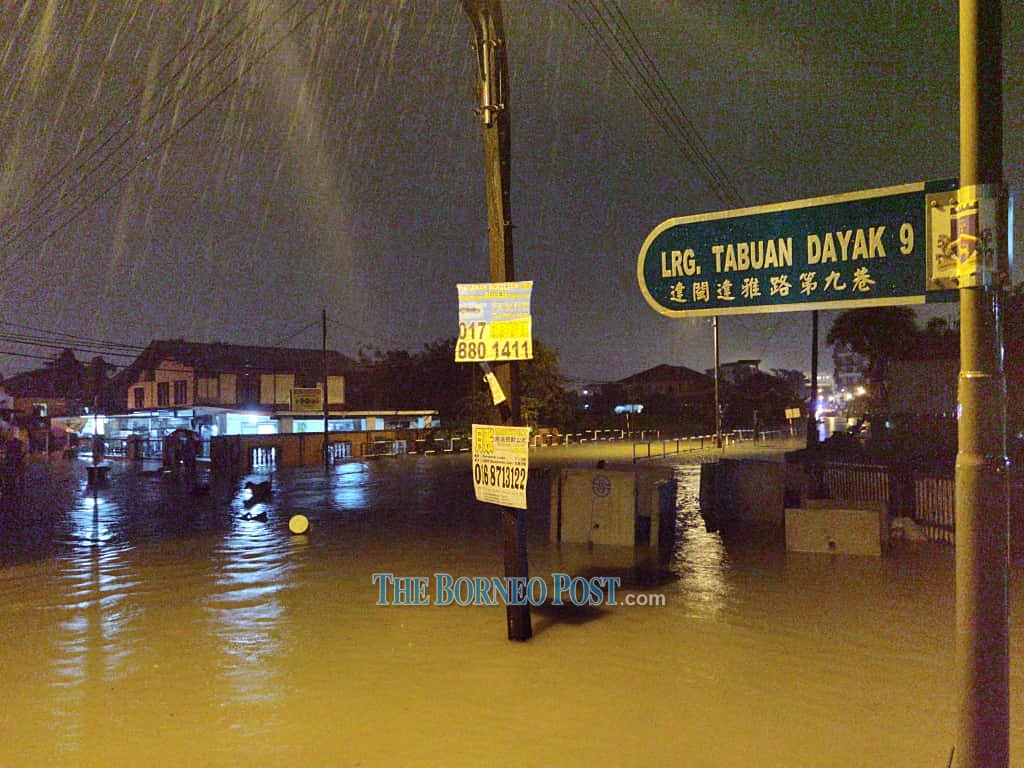 Floods are a perennial problem at Tabuan Dayak, which is along Sungai Tabuan in Kuching. – Photo by Chimon Upon

KUCHING (Jan 14): The Drainage and Irrigation Department (DID) Sarawak aims to finally commence the construction of a project to tackle flash floods here next year, with government funding announced in 2018.

According to Its director, Datuk Chok Moi Soon, RM150 million was allocated for projects in Kuching and RM100 million for Sibu some two years ago, but the implementation of the project here was held back by various factors, mainly at the federal level.

He told The Borneo Post today that the design and tender for the project in Kuching was expected to be finalised by end of this year, and the construction expected to start next year.

“The implementation of this project was delayed due to various factors which are beyond our control, he said when contacted.

“Among others are the changes and adjustment to the procurement method from an initial method of direct negotiation to open tender as well as changes in the federal government where the federal DID as the implementing agency had been assigned to a new ministry namely Ministry of Water, Land and Natural Resources along with the needs for DID to adjust new funding arrangement and so on.

“The project components include two pumping stations with detention ponds, 4.4km of raising of road as flood bund, concrete roadside drains with footpath and seven nos. of tidal control gate,” he said.

The project, which covers Kpg Hilir and Kpg Nangka areas along Batang Igan, is expected to be completed by July next year.

In December 2018, Local Government and Housing Ministry announced, in a statement, that the federal government had approved funding of RM250 million for the flood mitigation projects for Kuching and Sibu.

The statement was issued after a meeting between Minister of Local Government and Housing Sarawak Dato Sri Dr Sim Kui Hian and then federal Minister of Land, Water and Natural Resources Dr Xavier Jayakumar in Putrajaya.