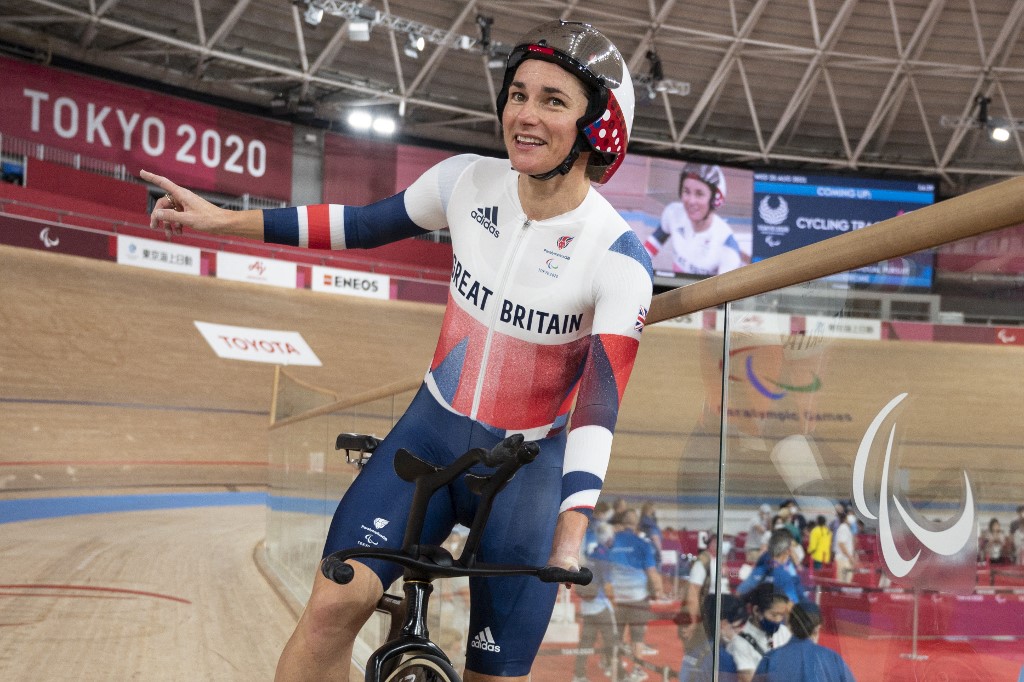 Paige Greco, an Australian cyclist, had the honour of winning the first gold of the Games, 354 days later than originally envisaged because of the Covid-19 pandemic and a day after a high-energy but poignant opening ceremony.

Despite a year-long postponement, and with coronavirus fears hanging over the event, world and Paralympic records tumbled in the swimming pool and on the cycling track on a pulsating first day of competition that saw 24 gold medals awarded.

Greco was in record-breaking form as she beat China’s Wang Xiaomei in the gold medal race in C1-C3 class 3,000 metre individual pursuit at the Izu Velodrome.

She smashed her own world record by nearly eight seconds in the heats and lowered it by another second and a half to 3min 50.815sec in the final.

“I still can’t believe it. I keep looking down and seeing (the gold medal). It’s not really sunk in yet,” said Greco.

Storey moved a step closer to becoming Britain’s greatest Paralympian, shattering her own world record in the heats before powering to victory in the C5 3,000 metres individual pursuit final for her 15th Paralympic gold.

The 43-year-old took the title for a fourth consecutive Games when she caught compatriot Crystal Lane-Wright inside eight laps of the 12.

Storey is just one medal behind the British record held by Mike Kenny, who won 16 swimming golds from 1976 to 1988.

“I never expected to go as quickly this morning, but I’m so glad I did,” said Storey.

Brazilian Daniel Dias, who is competing at his last Paralympics, has the chance to become the most decorated male Paralympic swimmer of all time if he wins three more golds to eclipse Kenny.

But could only take bronze in his opening event, the S5 men’s 200m freestyle, which was won by Italy’s Francesco Bocciardo in a new Paralympic record time.

Dias, who has now won 25 Paralympic medals, will have several more chances to add to his 14 golds starting Thursday in the 100m freestyle.

Defending gold medallists Australia suffered a setback in their bid to become the first team to top the wheelchair rugby podium at three consecutive Games, edged out 54-53 by Denmark.

“I’m pretty devastated, to be honest — I had never lost a game at the Paralympics ever,” said Australia’s Chris Bond.

“I don’t know what to feel. All we can do is turn around and win the next two and make the semi-final.”

The Games had been declared open on Tuesday night by Japan’s Emperor Naruhito, with International Paralympic Committee chief Andrew Parsons paying tribute to the grit of the athletes who made it to Tokyo.

“Many doubted this day would happen, many thought it impossible, but thanks to the efforts of many, the most transformative sports event on Earth is about to begin,” he said.

The opening ceremony was themed around the story of a one-winged plane taking to the skies, and featured high-octane musical and acrobatic sequences in a departure from the more sombre Olympics opening ceremony.

Notably missing were Afghanistan’s team, who had been trapped in the country after the Taliban takeover.

The IPC confirmed Wednesday that the team, comprising two athletes, had left Afghanistan, but declined to say where they had gone.

The opening ceremony took place before a largely empty stadium with almost all spectators barred from venues because of coronavirus rules.

Organisers on Wednesday reported 16 new Covid-19 cases linked to the Paralympics, including two athletes in the Paralympic Village, whose identities have not been disclosed.

The new cases bring the number of infections linked to the Paralympics to 176, most of them Japan-based staff or contractors.

Japan has recorded around 15,500 deaths from the virus with 40 percent of the population fully vaccinated.

Olympic and Paralympic organisers have insisted there is no evidence of infection spreading from Games participants to the Japanese public.

Tokyo and 13 areas are is already under a virus state of emergency and Japan’s government on Wednesday decided to extend it to eight more regions.