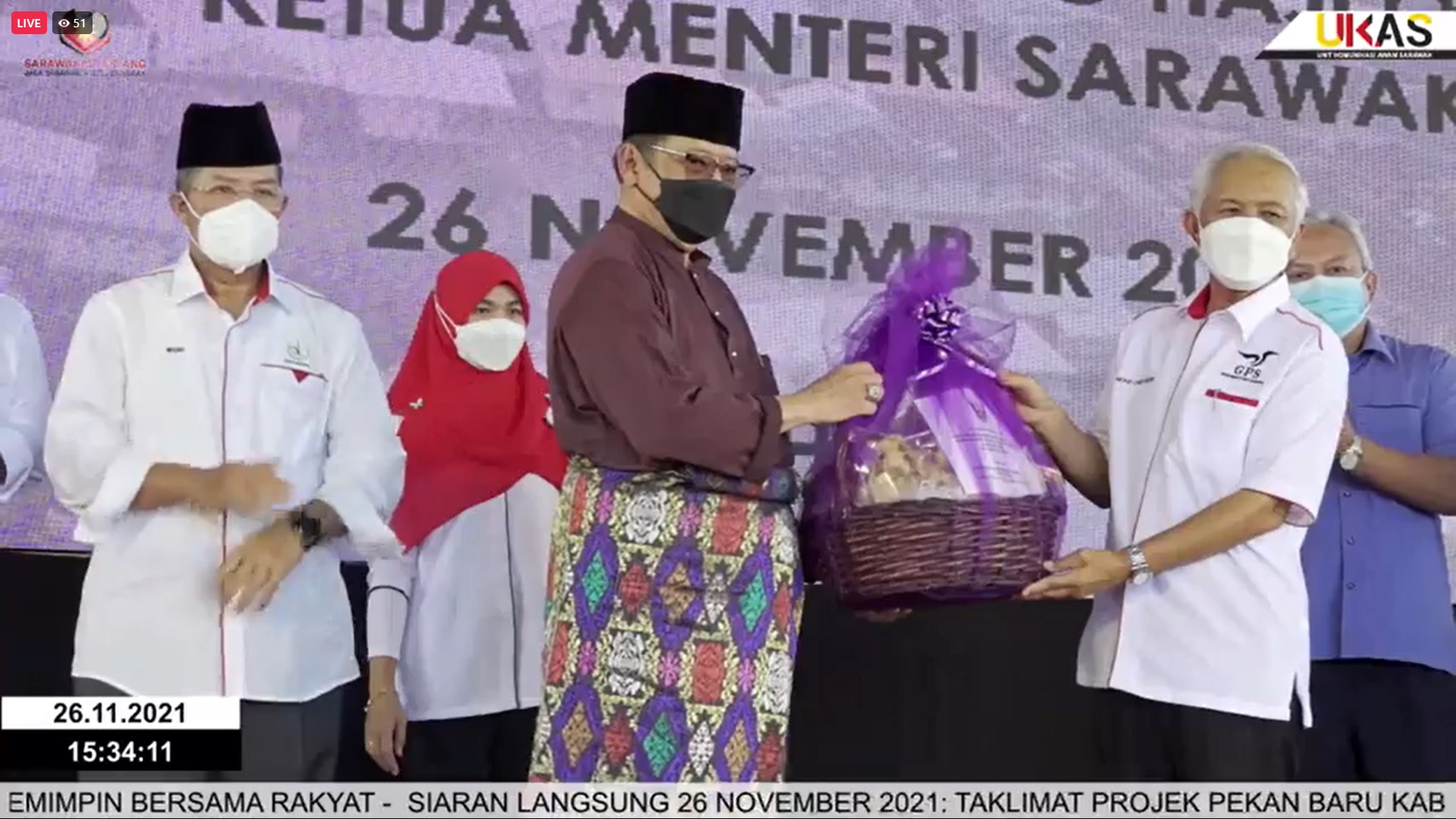 Mohd Chee Kadir (right) presents a souvenir to Abang Johari as a token of appreciation. screengrab via Facebook/Ukas

Speaking at the Meeting with the People Session at Kabong District Hawkers Centre today, he said Parti Pesaka Bumiputra Bersatu (PBB), being one of GPSs component parties, always allows its elected representatives to serve for at least two terms to ensure its continuity of the development.

He said it was through the unity and harmony with the government and the party that the peoples representatives could carry out their duties without any fear.

The leadership in PBB changes constantly to enable new blood to take over the leadership and when the leaders feel that it is time to step down, they will do so voluntarily.

That is why, in the government and in the party, we do not have stabbing (sic). If the peoples representative can serve, let them serve the people, he said.

He also said that with the good response from the people of Kabong, he hinted that former Kabong assemblyman Mohd Chee Kadir might stand again to defend the state seat in the upcoming state election.

Abang Johari said that as a chief minister, he would continue to serve and bring about developments that the people deserved as long as he is able to do so.

He said the GPS government had many plans to ensure Kabong would enjoy the development.

When I took over as the chief minister, I came to meet the people to understand their problems. One of the main problems was water supply.

I got to understand that the people always face water disruption, so I have urged the Rural Water Supply Department (JBALB) to solve this problem as soon as possible.

I have allocated RM150 million for the upgrading of water supply, and now the problem is solved, he said, adding that the GPS government would continue to work on the development of Kabong.

According to him, the government has allocated RM550 million to the Betong Division alone to solve the water supply problems.

He also said that despite the high cost for the water supply project, the state government always makes an effort to ensure that the people of Sarawak could enjoy continuous water supply.

It was also because of the GPS effort that the government was able to provide funds for the upgrading of roads and to construct bridges to connect the rural areas in Sarawak, he said.

He also said that the unity that the people of Sarawak enjoyed is the uniqueness of Sarawak, and because of this uniqueness that the Prime Minister Dato Sri Ismail Sabri Yaakob chose Sarawak to launch the Keluarga Malaysia.

In Sarawak, we have so many mixed marriages. It is this harmony that we are able to live peacefully, said Abang Johari.

He also said that the projects under the Rural Transformation Programme (RTP) have changed the landscape of Kabong.

Since 2016, more than 100 projects under RTP had been approved and had benefited the people especially the kampung and the longhouses.

He said it would bring positive impacts to the people in Kabong.