Navy divers pose with the flight data recorder recovered from the crash site.

JAKARTA:A black box from the crashed Indonesian passenger jet has been recovered, officials said yesterday, a discovery that could offer critical clues to explaining why the plane with 62 people aboard slammed into the sea.

Divers just off the coast of the capital Jakarta hauled the jets flight data recorder to the surface, as the hunt continues for its cockpit voice recorder.

Indonesian transport minister Budi Karya Sumadi told a live television briefing that the box had been found after the Sriwijaya Air Boeing 737-500 plunged about 3,000 metres in less than a minute before slamming into the Java Sea Saturday.

An AFP reporter on a navy ship said investigators started picking up strong signals from an area where they were searching, with divers able to retrieve the box in about an hour from the wreckage-littered seabed. 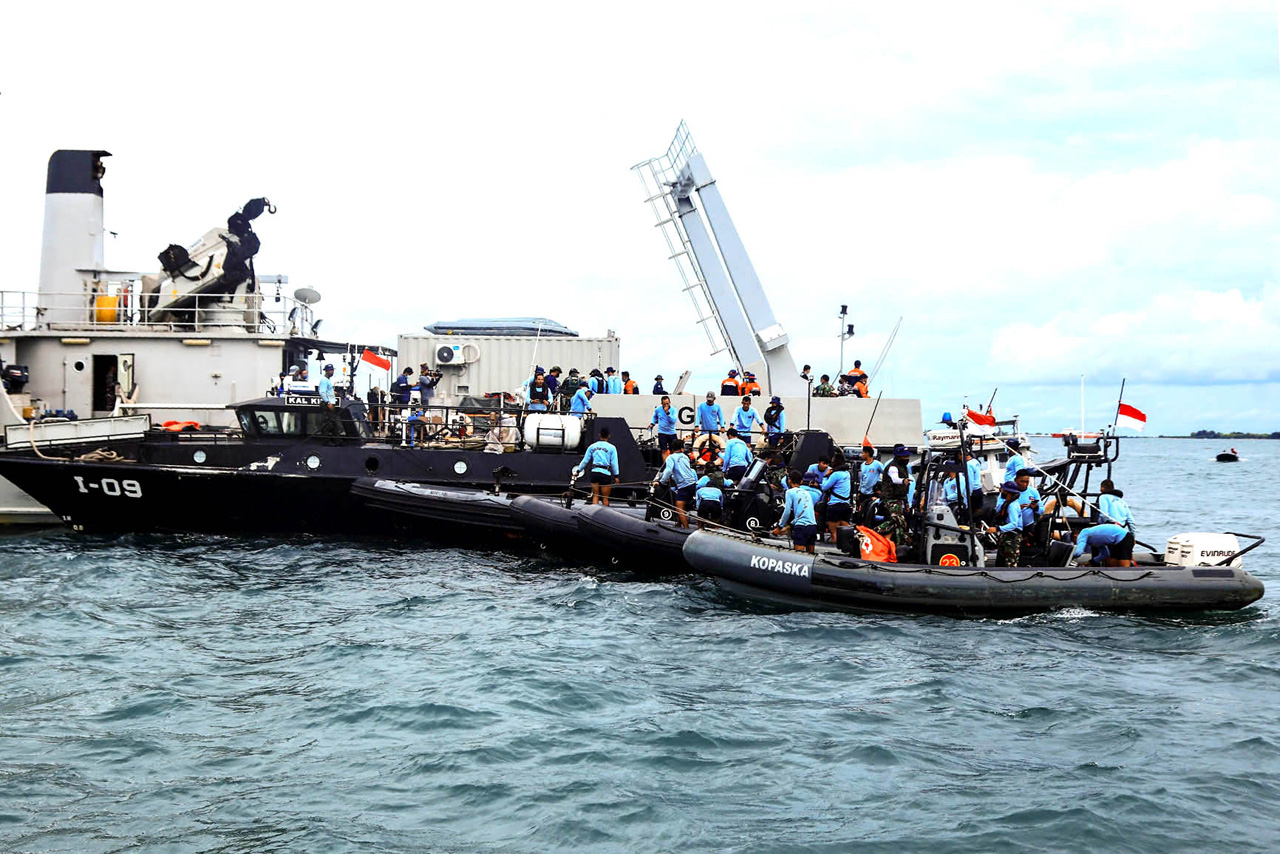 Navy divers head out to the crash site off the coast of Jakarta during the search operation for Sriwijaya Air flight SJ182 which crashed into the Java Sea minutes after takeoff on Jan 9.

So far authorities have been unable to explain why the 26-year-old plane crashed just four minutes after takeoff.

Black box data which record information about the speed, altitude and direction of the plane as well as flight crew conversations helps explain nearly 90 per cent of all crashes, according to aviation experts.

Sumadi added officials believe the cockpit voice recorder is nearby that of flight data recorder.

We strongly believe itll be found soon, he said.

Some 3,600 personnel are taking part in the recovery effort, assisted by dozens of boats and helicopters flying over small islands off the capitals coast.

The agency deployed a remotely operated vehicle to assist the divers.

Scores of body bags filled with human remains were being taken to a police morgue where forensic investigators hope to identify victims by matching fingerprints or DNA with distraught relatives some held out hope of survivors.

We havent accepted it yet, Inda Gunawan said of his brother Didik Gunardi who was on the doomed Saturday flight.

Our family is still hoping for a miracle that he is still alive.

Authorities have identified flight attendant Okky Bisma, 29, as the first confirmed victim after matching fingerprints from a retrieved hand to those in a government identity database.

Rest in peace up there darling and wait for me… in heaven, Okky Bismas wife Aldha Refa wrote on Instagram. There were 10 children among the passengers on the half-full plane, which had experienced pilots at the controls as it left Jakarta bound for Pontianak city on Borneo island on a 90-minute flight.

A transport safety agency investigator has said the crew did not declare an emergency or report technical problems with the plane before its dive, and that the 737 was likely intact when it hit the water.

Search-and-rescue agency chief Soerjanto Tjahjono echoed that view earlier Tuesday, pointing to the relatively small area where debris was scattered in about 23 metres of water.

The size is consistent with the assumption that the plane didnt explode before hitting the water, he added.

The damage seen on the retrieved fan blade also shows that the engine was still working at the time of the crash.

The crash probe was likely to take months, but a preliminary report was expected in 30 days.

Aviation analysts said flight-tracking data showed the plane sharply deviated from its intended course before it went into a steep dive.

Sriwijaya Air, which flies to destinations in Indonesia and across Southeast Asia, has had safety incidents including runway overruns.

But it has not had a fatal crash since starting operations in 2003.

Its CEO has said the jet, which was previously flown by US-based Continental Airlines and United Airlines, was in fit condition.

Indonesias fast-growing aviation sector has long been plagued by safety concerns, and its airlines were once banned from US and European airspace.

That accident and another in Ethiopia led to the grounding of the 737 MAX worldwide.

The 737 that went down Saturday was first produced decades ago and was not a MAX variant. AFP