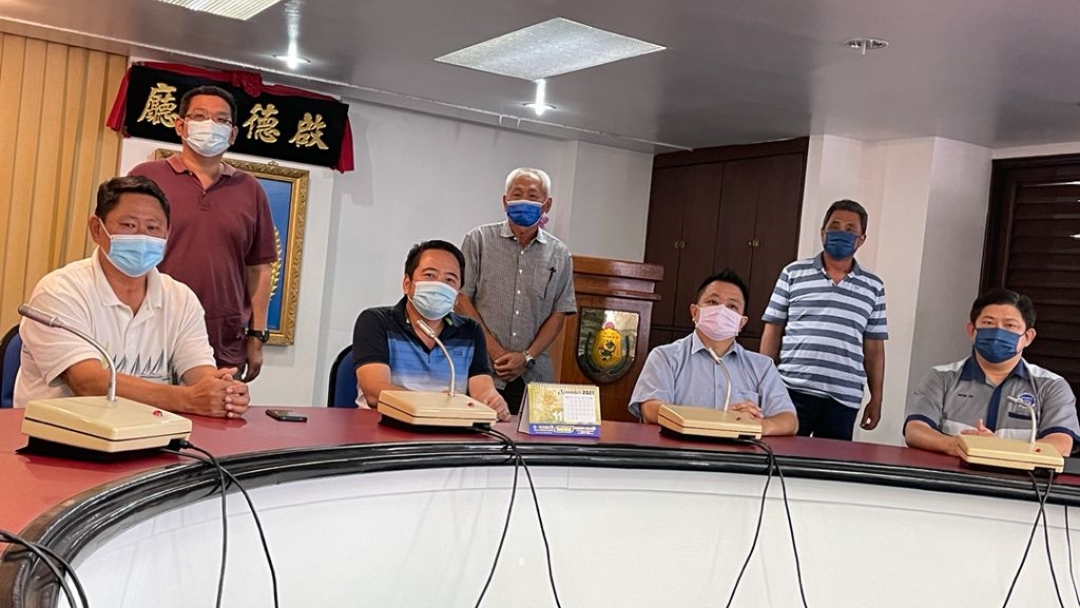 (Seated from left) Ting, Ling, Dr Yong, Tay and others at the press conference.

SIBU (Aug 26): Three associations from the shipbuilding industry here are hoping the government will review the plan for the Kampung Datu Redevelopment Project.

Samin president Dr Renco Yong in a press conference yesterday said the associations urged the government to review and to consider the safety aspect as the proposed reclamation of land measuring 83 metres for the redevelopment plan would further narrow the river.

He pointed out that the intention of the project is good for Sibu town, but narrowing the river would cause the river current to be stronger and unwanted accidents could happen.

Dr Yong said that the current width of the river is about 300 metres, and the government wanted to take 83 metres to turn it into land, which is one third of the river width.

River traffic is like land traffic; it is a two-way traffic. So, which means with only about 200 metres width for two vessels to cross each other, and also you have to consider that there are about six to eight shipyards at the other side of the river.

After the completion of building a ship, the ship would need to dock, and during launching accidents are prone to happen, he pointed out.

He also mentioned that no one could control the river current, thus, narrowing the riverbank would make it more dangerous.

Land traffic, you can control your car speed, but not the river current, even if you do not start the engine, the vessels will be swept away by the current. So, if you narrow the riverbank and the current becomes strong, collision with other vessels will happen, he said.

He added that a narrow riverbank also means encouraging flood in Sibu.

According to him, the proposed Kampung Datu Redevelopment to be implemented by Land Custody and Development Authority (LCDA) is located within Kampung Datu and Kampung Hilir and covers a total land area of 66.97 acres, including a proposed reclamation area of 10.85 acres.

The proposed project includes a 760-metre long reclamation on the eastern bank of Batang Igan.

The reclamation area protrudes approximately 83 metres into the Batang Igan.

Dr Yong, however, said he did not know the status of the project at the moment.

He urged those interested in this issue or would be affected by this reclamation of land to join the meeting with the consultation company via Zoom tomorrow afternoon.

He said those interested to join the meeting to inform the Sibu Chinese Chamber of Commerce and Industry (SCCCI) and meeting link will be provided to them.

We are not against this development plan, we believe it is good, but I think the government needs to look into this plan again, he said.