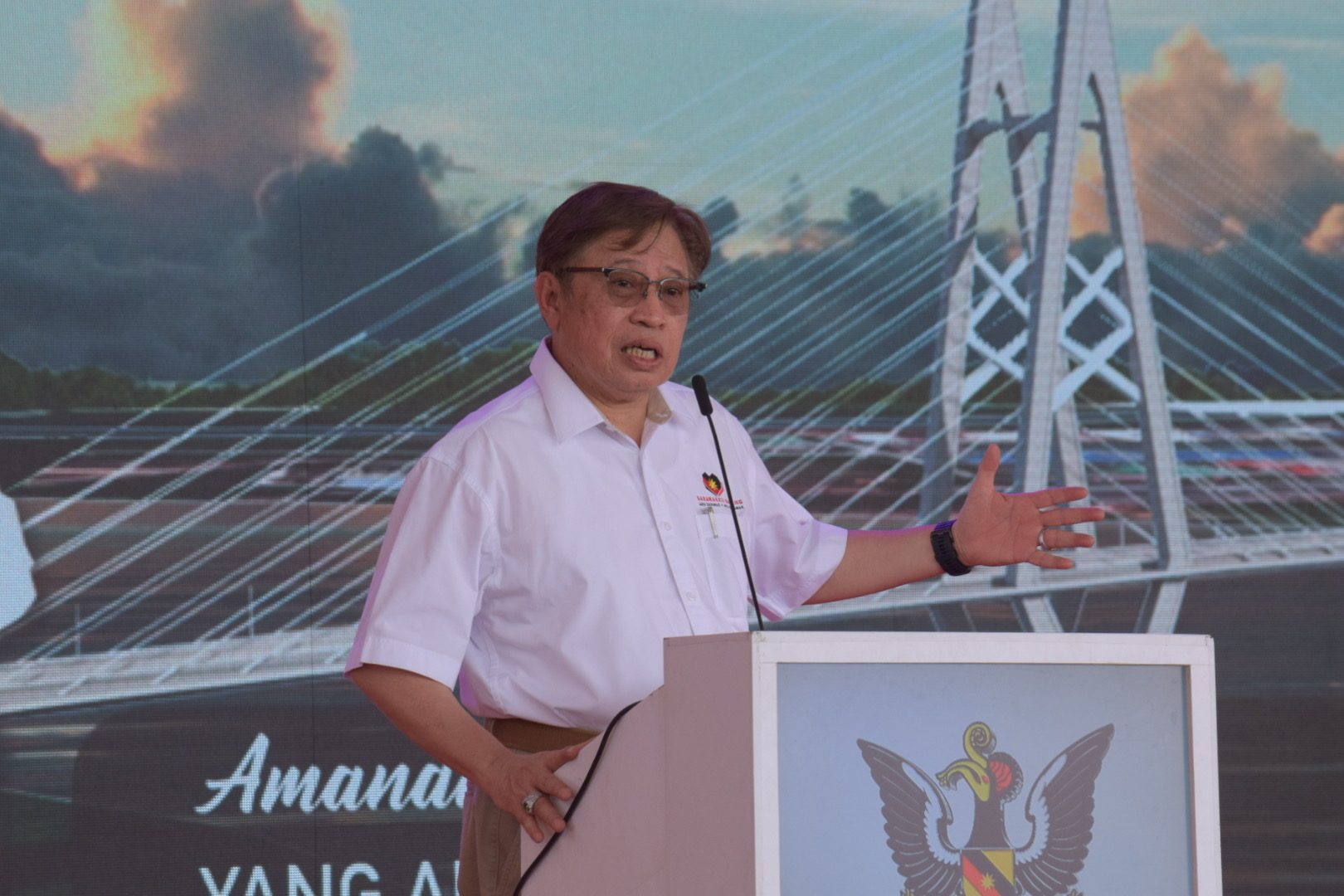 Abang Johari speaking at the earth-breaking ceremony for a bridge to be constructed across Sarawak River at Sejingkat. Photo by Roystein Emmor

The GPS chairman admitted however that there were limitations in reclaiming the rights and interests of the state when the coalition’s component parties were still a part of Barisan Nasional (BN).

“When we were still in BN’s fold, the coalition’s decisions must only be made after obtaining consensus from all the component parties and this resulted in some restraints for us to voice out for the state’s rights and interests.

“However, once we left the BN coalition, we could finally ask for what was originally entitled to the state and nobody can stop us. In a way, we cna take care of ourselves,” Abang Johari said during the earthbreaking ceremony for the Sarawak River Bridge at Sejingkat.

He remarked that the public wants a strong and stable government administering the state, in sharp contrast to the current political climate with party-hopping culture among politicians.

“Fortunately, there is no party-hopping among our members in Parti Pesaka Bumiputera Bersatu (PBB). There are definitely disagreements in all ranks of a political party but the core principle that we subscribe to is serving the public and not our self-interests.”

Abang Johari said that he had great responsibilities on his shoulders after succeeding the chief minister post from the late Pehin Sri Adenan Satem and he stressed that a leader must be properly moulded before taking up a top post, particularly when it comes to looking after a multi-racial society.

Touching on the state’s finances, Abang Johari said that the state’s five per cent sales tax imposed on petroleum products would have generated more revenue for the state’s coffers than the unfulfilled promise of the 20 per cent royalty as mentioned by the Pakatan Harapan coalition.

Since imposing the five per cent sales tax three years ago, he said that Sarawak managed to reap about RM7 billion in revenue so far and the state’s financial strength had allowed for the ambitious RM11 billion coastal road and second trunk road network mega project to proceed.

“If the market price of oil and gas increases, we also stand to benefit with more revenue generated from the five per cent sales tax we imposed. That was our intention.”

Abang Johari also said that through GPS, his administration had offered up to RM10,000 to the B40 and M40 groups for payment of housing deposit; RM1,000 for every newborn Sarawakian; and RM450 for post-natal care.

“Due to our racial harmony and being financially strong, some parties are jealous of us. Some are preying on public sentiment to create a disturbance and provoke conflicts and misunderstandings. Never in the history of our country did we have three prime ministers in three years.”

Moreover, Abang Johari said that he had been actively seeking for more funds to develop the state via alternative funding and a new financial model as well as the proposal to set up the state sovereign wealth fund.

“If we are given the mandate again in the upcoming state election, I will bring the proposal to set up a sovereign wealth fund to the State Legislative Assembly (DUN) next year for the sake of the future generations.

“If the revenue from the oil and gas resources dries up, we will still have income from the sovereign fund and will not be bankrupt within three years under my leadership as accused by certain quarters,” he said.

Abang Johari said that his aspirations when taking over from the late Adenan was to bring development to all corners of Sarawak.

“While great challenges might be present along the way, there must always be a way to overcome it,” he said.