DCM admits forgetting to put face mask back on at food stalls, to pay compound 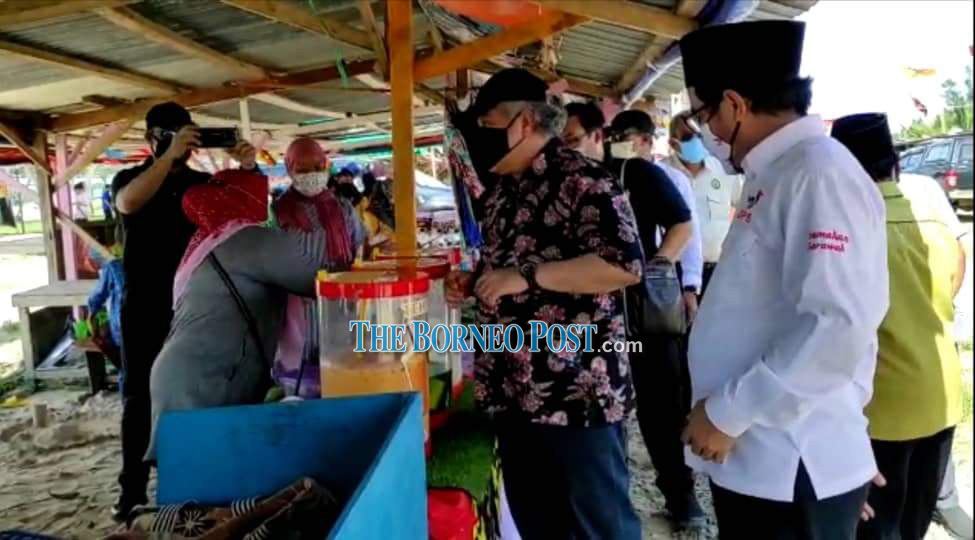 Photo shows Awang Tengah with his face mask on at one of the stalls prior to taking it off for a drink.

KUCHING (April 8): Deputy Chief Minister Datuk Amar Awang Tengah Ali Hasan has admitted he failed to put his face mask back on during a recent visit to Matu, breaching standard operating procedures (SOPs) to stop the spread of Covid-19.

He revealed he had already been contacted by the police for the infraction, which was caught on a video that has since gone viral.

In the 25-second video, Awang Tengah is seen without his mask on while walking past stalls selling food and beverages.

He clarified that prior to when the video was taken, he had been wearing a face mask but had taken it off while getting a drink at a stall.

I have been contacted by the police on my failure to adhere to the standard operating procedures for not wearing a face mask while in public places visiting some stalls that were open in conjunction with my visit. The police have contacted me and I will be issued a compound for that.

The stalls usually operate on weekends. I went to the stall and bought some food and drinks and took off my face mask, while having my food. But it was my mistake, I was in a hurry to leave Matu and I did not realise that I was not wearing my face mask, he said today when asked about the video.

On another matter, he also explained that the money he is seen handing out to traders in the video was payment for goods he had purchased from the stalls.

As he was in a hurry at that point of time, he said his special officer had been the one to collect the items.

While walking hurriedly, I did not realise that my face mask was off as I was in a hurry to leave as per the advice of my special officer and the helicopter pilot, who had alerted us to leave for Kuching. So I gave money to the stallholders and told them to pack my purchases.

I have been contacted by the police saying I will be issued a compound. I admit my mistake, and if issued the compound, I will pay it, he added.

Awang Tengah did not reveal the cost of the compound, which would be issued later this afternoon.

The federal government has said RM1,500 is the recommended compound for not wearing a face mask, although the maximum compound remains at RM10,000.